Dutch grass is ready for Euro 2012 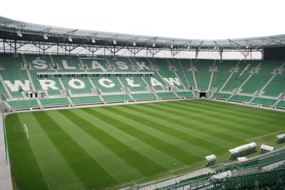 March 2012 - Traditionally the UEFA sends a delegation of grass experts to the host countries to evaluate the condition of the pitches. In many cases this means that the majority of the stadiums gets fitted with a new pitch in order to live up to the high UEFA standards. For the replacement of the pitches in Poland and Ukraine the UEFA uses an open enrolment; every sod company in the world has the chance to claim the contract.

World class grass
Just like every other UEFA Euro Cup and FIFA World Cup the Dutch sod growers are ready to provide the best pitch available. The UEFA is very well aware of the professionalism of the Dutch, therefore there is a substantial chance that the pitches for Euro 2012 will be of Dutch origin. Dutch grass truly makes a difference which is proven by the fact that Barenbrug grass was present at all the UEFA Euro Cups and FIFA World Cups of this century. (Holland/Belgium, South Korea/Japan, Germany, Portugal and South-Africa).

Overseeding
The other pitches which are not being returfed will be overseeded. Barenbrug has shown in the past that overseeding is a very effective way to create a great pitch. The evidence for this was the last-minute repair of the South-African pitches during the 2010 World Cup. The Barenbrug SOS overseeding grass seed, specially flown in from Holland, saved the South-African fields. For the diverse circumstances in both Poland and Ukraine, Barenbrug also has the right grass seed mixtures available.

Is your sward in need of repair too? Whether it’s for the goal area in a stadium, the local amateur club’s penalty area or your neighbourhood football pitch, go for SOS now!

Click here for more information about SOS - Super Over Seeding!